Aurora was the ancient Roman goddess of the dawn and equivalent of Greek Eos.  Now her name belongs to a phenomenon, a Disney princess, and thousands of little girls.  Aurora has been in the American top 1000 for the vast majority of years since 1880, yet 2015 was the first year she’d ever been in the top 100!  Last year she ranked #79, up from #116 the year previously.  Her highest popularity is currently in states to the north; Aurora is the #3 name in Alaska and #5 in Montana, and she also does well in states like Maine, Idaho, and the Dakotas.  Probably, she does best in states where one can…uh…see the aurora. 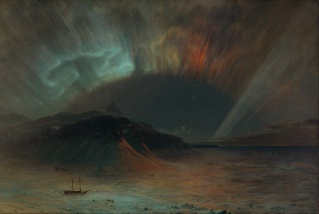 Depiction of the Aurora Borealis, a.k.a “Northern Lights”

For those of us who grew up watching Disney movies, we remember that Aurora was Sleeping Beauty’s birth name before the fairies called her “Briar Rose.”  I’m not sure how much that affects young Auroras, considering that the movie Sleeping Beauty came out in 1959 and that the name was least popular between the late 50s and 80s (though it did rank higher in 1960 than 1959 and 1961, so that suggest there is at least *some* influence).  Don’t quote me since any of my friends can tell you that I have serious issues with Disney and am almost a Wednesday Addams in the flesh, but…I wonder if the name started to rebound in the 90s because of some Disney revival or princess craze.   At least, that’s when The Little Mermaid caused a usage spike for the name Ariel (for both genders, actually), when Jasmine was in her heyday, and when parents really started to use Belle again (though still not often enough for the top 1000…that’ll be next year, I’m sure).  As for the past couple years, the possibility exists that the new Maleficent movie may have boosted Aurora (indeed, Maleficent made her first appearance in the extended data last year).  However, Aurora has been growing more popular for years, and might have made the same popularity jump between 2014 and 2015 without Maleficent.

Being an Ancient Roman name also helps Aurora‘s case.  Other Roman names like Luna and Valentina are very trendy, and so are other mythological names from both the Roman and Greek traditions.

For a short name, Aurora has some nickname potential.  Options include Aura, Rory, Rora, and Dawn.  Still, the popularity may turn some people off.  In that case, consider Aurelia, another Roman name that currently only ranks #802 and means “golden.”  Alternatively, go Greek.  Eos (pr. Ay-ohs) is definitely an option.