With the increasing popularity of Otto in the U.S. (currently ranked #527), will some parents start choosing Odo for their baby’s name?  The two names are related (deriving from a Germanic word meaning “wealth” or “fortune,” though Odo is pronounced more like Oh-doe than Ought-o or Odd-o.  A relative’s Star Trek binge-watching planted this obscure name in my mind.  To me, Odo evokes images of handsome medieval knights and polite, stern space aliens.

Odo has never appeared in the Social Security Administration‘s extended name data.  In order for that to happen, a name has to be given to at least five same-gendered babies in a year.  Thankfully, the SSA’s “Popular Baby Names” isn’t the only database available to search for baby name histories.  You can also glance at the Social Security Death Index* for clues.  The SSDI is especially useful for researching names in the late 19th century and early 20th century, because it doesn’t seem to have minimal popularity restrictions (which are in place for the birth data to protect the privacy of presumably living citizens).  Also, sometimes if you see a “popular” 19th century name in the birth data, you’ll find a higher number of them in the death data.  No idea why *that* is, but it is another reason why the SSDI is such a valuable tool.  Finally, you can sometimes see the names of people born before 1880 in the death index; the birth index starts at 1880.

While I never found Odo in the birth data, I did find over sixty Odo‘s in the death index.  The earliest two were born in 1874 (in Wisconsin and Texas), and the last in 1946 (South Carolina).  The youngest was probably the son of another Odo who was born in 1915 in the same SC town; overall, the last Odo born before the youngest (that has died, anyway) was born in 1938.  According to the death index, no more than three Odo‘s were born each year nationally.  While there might be a handful still living, this paucity suggests the possibility that Odo never reached SSA’s minimal popularity threshold of 5 uses even accounting for incomplete/inaccurate name info before 1937.  The other possibility is that even if five Odo‘s were born in a single year after 1879, at least two weren’t recorded because they died early or worked in the wrong employment sector.

Despite Odo‘s status as an extremely rare name in 21st century America, it isn’t exactly obscure.  Nowadays, Odo mostly appears in pop culture and video games.  The book Fellowship of the Ring mentions a minor character named Odo Proudfoot, who is a cousin to Bilbo Baggins.  An Odo is also referenced in Harry Potter through song.  Star Trek’s Odo is probably better known than the examples above, though.  In Deep Space Nine, Odo is the station’s shape-shifting, Quark-hating security guard.  That Odo is a major character, and I’m honestly surprised the name didn’t breach the extended data at least once during the show’s run in the 1990s.  Odo isn’t exactly a sci-fi creation; it’s a historical name!

From left: Bishop Odo, King William, and their brother Robert

Did I mention history?  Famous early bearers include King Odo of France (also known as Eudes) and Saint Odo of Cluny.  William the Conqueror also had a maternal half-brother named Odo who was Earl of Kent and Bishop of Bayeux.  If you’ve ever played “Crusader Kings II” as I have, you may have interacted with this character (whose surname is “de Conteville”).  In real life, he wasn’t the only Odo in England.  The 1086 Domesday Book records several individuals named Odo and even one Odolina.

What do you think of Odo?  Is it too weird or pretentious for modern usage, or is it like a book just waiting to be dusted off and read?  Would *you* use it?  Let me know in the comments!

*If you’d like to access the SSDI and don’t have a subscription to Ancestry.com, you can do as I did and go on Family Search, which offers it for free.

“AND MY AXE!”  These are some of the most famous and meme-ified words from Lord of the Rings, alongside “one does not simply walk into Mordor,” “my precious,” and “they’re taking the Hobbits to Isengard!”

But here I am thinking about names and saying “AND MY…Jax?”  Some of the trendiest boys’ baby names this decade contain the sound “ax.”  Jaxon feels like the new Jayden, and Max the new Matt.  Jaxson, now a top 100 name, has only appeared in the extended data since 1991 and the top 1000 since 1999.  25 years is incredibly young for a name, though admittedly, notorious Nevaeh is even younger at 19.  However, men’s names also diversify and mature more slowly than women’s names, which basically renders Jaxson a kindergartner and Nevaeh his 3rd-grade sister.

How about we play a fun game?  I dare you to read each of the following names aloud, preceded by “And my…”  For example, “And my Baxter!”  Parents often use this kind of exercise to decide whether their chosen baby name would sound good on a doctor or lawyer.  This evolution of the game simply serves to find a name that sounds good with the meme.  The names you’ll see below were all given to American babies in 2015, according to data from the Social Security Administration. 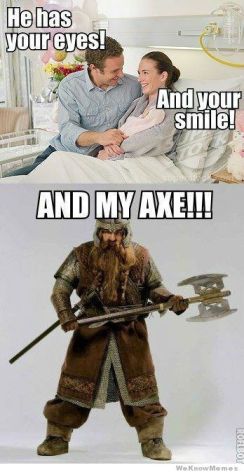 Maxwell – #113.  The most popular long-form of Max, and one of the older names in this set.  Popularity was fairly volatile until the 1970s, but usage has been fairly steady in the top 200 for the last 25 years.  One of the most famous associations is the Beatles song “Maxwell’s Silver Hammer.”

Braxton – #122.  This is actually one of the older names here.  He’s been in the top 1000 since the 1980s, but appears in SSA birth data during most of the 20th century.  It’s no wonder this is a “classic” ‘ax’ name – potential namesake Carter Braxton was a signer of the Declaration of Independence.

Maximus – #197.  I was surprised to learn that Maximus has only appeared in the extended data since 1997, considering it’s Ancient Roman.  Of course, I’m not surprised that he’s only popular because of Gladiator, which was released in 2000.  There were only 11 boys named Maximus in 1999, but there were close to 200 the next year and almost 900 in 2001.

Maximiliano – #302.  This ‘ax’ is a little unwieldy, but can’t you appreciate its six syllables?  Maximiliano is positively melodic!

Axl – #761.  I think the growing popularity of Axl corresponds more to the character on ABC’s The Middle than to Guns and Roses.

Maxine – 231 girls. Maxine is the highest ranking ‘ax’ name for girls, but barely misses the cut for the top 1000.  Maxine‘s peak popularity was in the 1920s, and she’s been out of the top 1000 for twenty years.  But, raw usage has nearly doubled from ten years ago.  I wouldn’t be surprised if she reenters the top 1000 by the next Twenties.  That would be centennial serendipity.

Pax – 63 boys, 6 girls.  Pax is the Roman personification/goddess of peace.  As a boys’ name, it’s probably meant as a nickname for Paxton.

Jaxiel – 29 boys.  Yaxiel – 13 boys.  Jaxiel and Yaxiel appear to be inspired by Bible names, but I don’t know if they are Biblical themselves.  If they are, the Bible names that come to mind are Jahziel (29), Jehiel (9), and even Ezekiel (2755/#148).  While there’s very little information on either of these names, a quick Google search suggests that both spellings almost always appear next to Spanish surnames.

Ajax – 16 boys.  The image of Gimli presenting a household cleaner as a weapon cracks me up, but Ajax is a rather ancient name.

Axe – 8 boys.  AND MY…wait.  The important question we must ask ourselves: is it Axe like the weapon or the body spray?

Drax – 6 boys.  The thought of Gimli offering up Drax the Destroyer is kind of hilarious.

Axiom – 5 boys.  The words “maxim” and “axiom” both refer to some kind of truth.  Both are on this list…twin names?

Baxley – 5 girls.  Baxlee was also given to five girls.

Thoughts?  Feel free to ax me questions in the comments.

Links to general information/data about names: